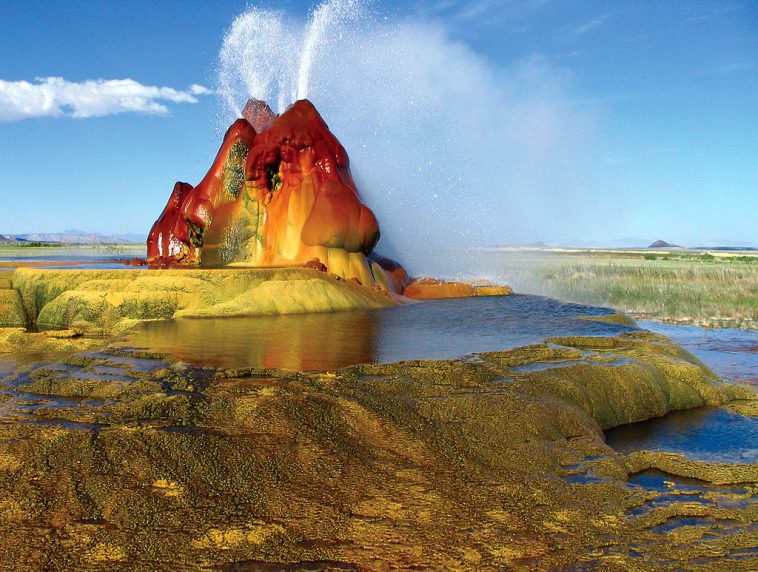 Our Mother Earth is a huge planet, and therefore it is not surprising that there are many strange and unbelievable places, the appearance and existence of which is difficult and sometimes even impossible to explain. Some of them obtain such a mysterious and ethereal beauty that it seems that they were created by aliens. Most of these weird places keep their secrets that will be never revealed to us – mere mortal people.

So we are simply left with a possibility to enjoy mystique and beauty of them by guessing what is the meaning and the story of origins of these places on our planet. Below we introduce you to the top 10 places considered to be not only beautiful but also strangest in the world today.

This forest located in Romania not far from Cluj-Napoca can be called not only one of the weirdest places on our planet, but also o of the strangest and the most mysterious forests on Earth. It is often referred the Bermuda Triangle of Romania since it is known for a very high paranormal activity and the place of many events that cannot be explained.

Such events include ghost sightings, an appearance of apparitions, faces on photographs taken there that are not visible to the naked eye without a camera, and many others. Visitors to the forest often admit that they feel scared and anxious by being there, and experience the feeling of being watched by someone. Read more about Hoia-Baciu Forest.

The Lake with beautiful and unexplained pink water is located in Western Australia on the island in the Archipelago of Recherche. The reason of why this natural reservoir is included into the list of the weirdest places on Earth is that the secret of its pink color has not been revealed yet.

The water of the lake is so bright pink that is almost identical to the color of the Barbie doll’s clothes. The lake is shallow with the length of 600 meters and the width of 250 meters.

Even though the water in Lake Hillier looks suspicious and even threatening, it is absolutely safe to swim in it. Learn more about The Pink Lake Hillier of Australia. Photo credit: By Aussie Oc

Badab-e surt is a real natural wonder that is located in the province of Mazandaran in the north of Iran at the height of more than 1,800 meters above sea level. This place is famous for a number of travertine terraces that had been formed for thousand years.

The travertine terraces have a very unique and bright golden color due to the high concentration of iron oxide. Nowadays it is one of the most beautiful and visited places in Iran by attracting thousands of both national and international tourists. Photo credit: By Samaee – Badab Soort spring

The door to Hell – is a gas crater Derweze located in the Turkmen desert Karakumy. It is one of the most magnificent and impressive places on the planet that at first sight looks like a dramatic scene from a sci-fi movie.

This fiery hole has been aflame for more than 40 years already: it was created by a group of Soviet geologists, who were discovering and studying that area in 1971. When they opened the hole in the ground, they have found methane gas there, and in order to prevent the further spread of it, they have set the hole on fire. Despite the fact that in 2010 the president of Turkmenistan ordered the closure of the crater, it is still open and attracts thousands of tourists. Photo credit: By Tormod Sandtorv – Flickr: Darvasa gas crater panorama

Socotra is a small island that is located in the Arabian sea and belongs to Yemen. It can be fairly called the botanical paradise in the Indian Ocean. It is famous for

It is famous for its rich and unique flora and fauna. Socotra is often called the pearl of Arabia due to its magnificent beauty and primordial nature. This place constantly attracts nature lovers, adventurers and those, who are seeking for a peaceful and relaxing holiday. It is believed to be one of the weirdest places on Earth because it is absolutely isolated with no roads that lead there.

This place constantly attracts nature lovers, adventurers and those, who are seeking for a peaceful and relaxing holiday. It is believed to be one of the weirdest places on Earth because it is absolutely isolated with no roads that lead there. See more amazing photos of Socotra. Photo credit: By Boris Khvostichenko (Boriskhv )

Oradour-Sur-Glane is probably the most tragic and horrible places on the territory of France. It is an old village, all the inhabitants of which were killed by German fascists during the Second World War in 1944.

In total, 642 people, including women, elderly and children, were killed and all buildings and houses were burned. An interesting fact about this village is that it was not restored after the war – the French government decided to leave it in ruins as a memorial and as a memory of all its victims. Read more about Oradour. Photo credit: By Dna-Dennis

This Geyser is located in the United States in the state of Nevada, and since it belongs to the private territory, it is not very famous. When you see its pictures first, it is difficult and almost impossible to believe that it was actually created completely by Mother Nature.

The owner of the territory, on which the geyser is located, protects it very well and therefore established the fence around it in order to prevent a massive flow of tourists.

However, there are still brave souls, who succeed to get closer to this natural wonder and take a couple of pictures of it. Photo (used also as a cover photo) credit: By Jeremy C. Munns

This unusual Red Beach is located in the Liaohe River Delta, which is approximately 30 km from Panjin City. The beach is called red because of a very specific type of sea weed that grows in the saline-alkali soil. It starts growing in spring and remains green during all summer months.

However, in autumn the seaweed turns bright red, and the whole beach gets covered with a red carpet, which creates amazing an unforgettable scarlet landscape. The Red Beach today is one of the biggest reed marshes in Asia and is a home for more than 400 different species, many of which are endangered. Photo credit: By 吴张帆

The Gardens of Bomarzo near the medieval town of Bomarzo is one the most unusual and beautiful places in Italy that is also referred unofficially as the Monster Park. Created in the middle of the 16th century, it reflects the human grief and sadness.

It was established by Prince Pier Francesco Orsini, who had been in the war for many years, and after coming back he found out that his wife had died.

In order to portray his sadness and grief, he decided to the Villa of Wonders full of marvelous, shocking and even terrifying sculptures. Learn more about the park of monsters. Photo credit: By Alessio Damato

The Bermuda Triangle, that is also known as the Devil’s Triangle, is probably the strangest and the most mysterious place in the world.

Today it is fairly considered to be the most dangerous abnormal zone, because of dozens of ships and aircraft and thousands of people completely disappear there.

The frightening statistics say that over 1,500 people disappeared in this zone in the past 60 years. There are many theories and legends about the Bermuda Triangle, however its secret has not been revealed yet. One of the most common but unbelievable theories state that the Triangle is the gate to another parallel dimension. Learn more about this amazing place.

If you have ever wondered where the The Bermuda Triangle actually is located, below is the map!

Find out other interesting travel destinations from our article: Top 10 Beautiful Places To Visit In The World. and be sure to discover also The Seven Wonders of the Modern World.

Have you visited any of these wonderful places or are you planning to visit? We think at Wondertabloid.com that these are just simple amazing places, every traveler should see!

natural wonderswonders of the world