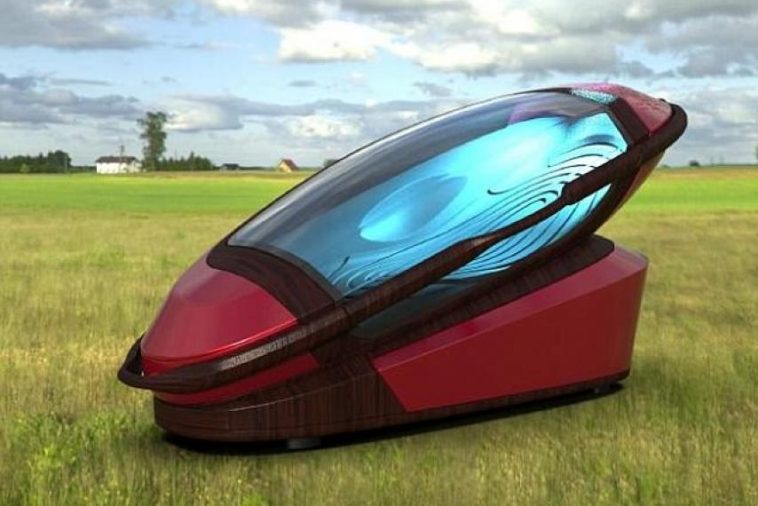 “Sarco does not use any restricted drugs, or require any special expertise such as the insertion of an intravenous needle,” says Dr. Nitschke, the controversial founder of Exit International, whose mission is “to inform members & support them in their end of life decision-making.”

The machine itself looks actually quite cool. It is “powered by” nitrogen, so some science fiction fans could easily confuse it to a nitrogen powered travel capsule. Actually, it looks almost just like a futuristic space capsule.

However, you should not take a test drive and press the start, because it will be your last drive in this world. Pressing the button fills the pod with nitrogen, which kills you.

The inventor of the suicide machine Dr. Nitschke, who has aided in hundreds of what he calls “rational suicides”, says:

“The person who wants to die presses the button and the capsule is filled with nitrogen. He or she will feel a bit dizzy but will then rapidly lose consciousness and die,”

The machine was recently displayed at Amsterdam funeral fair. It was demonstrated with virtual reality glasses.

Visitors were able to try with VR glasses how it feels to sit on the machine. According to the Guardian, comments varied from quite cool to not interested at all.

“It was really an experience and a strange thing to see. But very pretty and calm. You see the moon, you see the sea. It’s very calm.”

If you are wondering how much suicide machine will costs, we have good news! After the first prototype will be built (and hopefully not tested with live person), the design will be put online as an open-source document.The inventor explains:

Share this story! What you think about the Suicide Machine? Is it good idea to have an comfortable way to end your own life when you choose so?