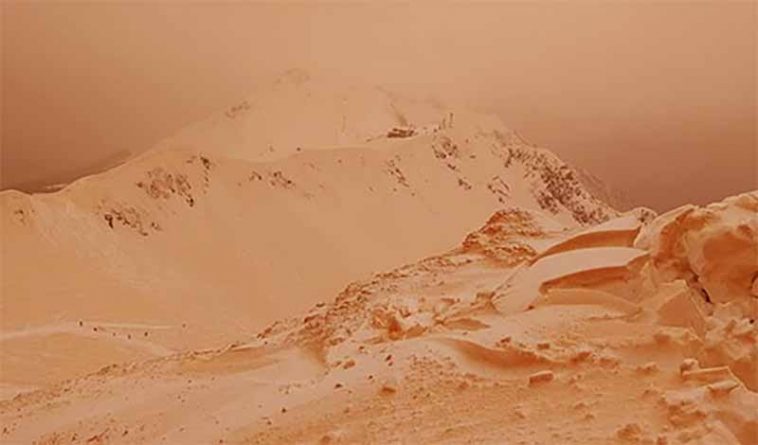 Orange snow covered The Russian Caucasus and several other areas in eastern Europe. There are many tourist resorts in affected areas, including ski resorts. The orange snow practically turned snowy mountains into sand dunes.

People have described scenes as eerie and apocalyptic after freak weather phenomenon turned the white snow into an spooky orange shade similar as seen in pictures from the Mars.

Pictures of orange-tinted snow have been posted at least from Russia, Bulgaria, Ukraine, Romania and Moldova. The event was reported also by the BBC and ABC News among other international media outlets.

Weather experts say that phenomenon was likely caused by winds carrying sand from the Sahara, which then fell as rain and gives the white snow its strange colors which varied from light yellow to intense orange and even brown.

This phenomenon occurs roughly once every five years. Some conspiracy theorist have offered other explanations such as uncontrolled emissions originating from secret chemical (weapon) factories to dust caused by meteor explosion. However, people within affected areas have complained of sand in their mouths, so maybe weather experts explanation is most likely the correct one.