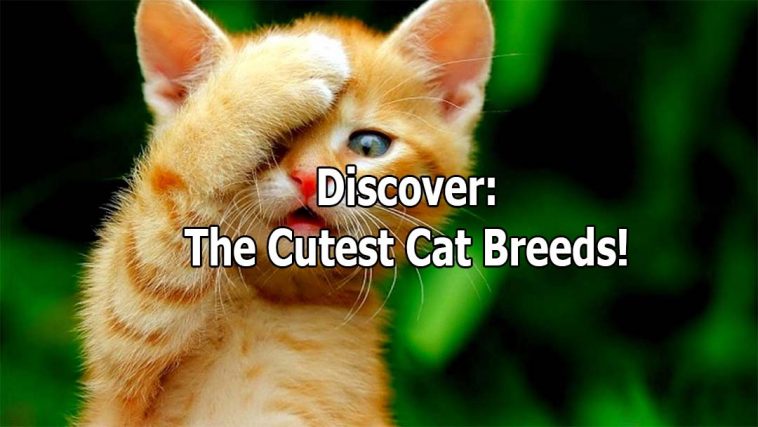 Cats are considered to be the most adorable creatures on the planet and one of the best our friends due to their companionship and social character.

If you are a true cat lover, you would probably say that all cats are cute regardless their breed. However, there are some exceptional cat breeds that are able to enchant anyone with their cuteness – even the most avid dog lover. The top list of these cats are presented in this article that will definitely give you a portion of happiness and lots of positive emotions.

Due to their owl-like eyes and folded ears, this breed is fairly believed to be one of the cutest. It is quite a new breed in the cat world because it was officially registered only in 1966. The cuteness of Scottish cats is a result of a natural dominant-gene mutation, which unfortunately does not only give cats such a unique and charming appearance, but also various health problems.

These furry blue-eyed creatures are loved for their silky hair, a balanced body type, gentle and sociable nature. Though their most common and popular colouring is snow-white, the colour palette is very diverse and can include mix of black, brown and reddish colours. Due to their mischievous character, Turkish angoras are very playful, which makes them perfect companions for kids.

For many years this cat bread has been remaining one of the most popular shorthair breed both in Russia and abroad. Breeders and cat lovers love this cat for its elegance, grace, deep green eyes and of course for its silver-tipped coat. First these cats appeared in the Northern part of Russia, but soon became extinct, and returned back to the cat world only in 1960s.

If you see these fluffy, fat and a bit clumsy creatures with a short face and big eyes, it is almost impossible to resist their cuteness and not to smile. Persian cats appeared first in England in 1800s and until today remain of the most popular cat breeds. Though they are quite lazy and prefer to sleep a lot, they have a playful character and like to spend time with their owner. Due to their long hair and a specific eyes structure, they require constant maintenance and care, which makes this breed quiet problematic.

These adorable cats with blue eyes are known for their grace and a little bit mysterious appearance. They first appeared in Europe in 1871 in England at the First National Crystal Palace Show, where they were described by journalists as unnatural and nightmare kind of cat. They are characterized by a long life expectancy, playful nature and a bit stubborn character.

It is quite rare cat breed that thanks to its animal prints looks like a jungle wild cat. It appeared in 1974 after an accidental hybrid mixture of Abyssinian and Siamese. Ocicats have athletic and graceful body, as well as an arched neck. Though they look like wild cats, they are absolutely domesticated and love being with people, which makes them perfect companions and beloved family members.

Appearance of radgolls is a bit similar to Siamese due to the same colour of their fur and light blue eyes. The main difference between them is the length of the coat: the fur of radgolls is longer. With regards to their characters these cats are known as very loyal, sociable, affectionate and playful companion: they love their owner and will follow him or her everywhere. The motherland of this breed is the United States, where it appeared in the middle of 1960s as a mix of two other breeds – Persian and Birman.

It is not only very cute cat breed, but also one of the largest domesticated breeds in the world. Due to its size it is believed that maine coons appeared after a mix of a domesticated and a wild cat. Their attractive coat that can be grey, red, brown, black and silver makes them look very elegant, graceful and noble. In addition, their hair has a very unique quality: it is absolutely water resistant and very thick, which helps maine coon to survive in very cold weather conditions. People love them for their character: practice shows that these cats are as loyal as dogs.

Birman cats are among the cutest and the most popular breeds existing today. Their official name is Sacred cats of Burma. According to one old legend, the white ancestors of Birman cats lived in a Burmese temple many centuries ago together with a priest. However, one day a tragedy happened: the priest was killed by a group of robbers. After his death all the cats that lived in the temple turned into golden color with the grace of Goddess of this temple. The legend also says that even their blue eyes of the cats are the reflection of the Goddess. In Europe and the United States Birman breed appeared not so much time ago – in the 20th century.

This breed belongs to the category of the most ancient. It arrived to Great Britain from Egypt in the 1st century AD. It is quite easy to distinguish this breed because British cats have a very specific appearance: their coat is quiet thick, soft and looks like velvet. In addition they also have big golden eyes and rounded cheeks. This all make them similar to cute little teddy bears. As family members and companions they are calm and not intrusive.

Due to their exotic appearance and quite significant size these cats look like tigers. It is one of the most recent cat breeds in the world: it appeared in the United States in 1993, but was recognized almost 15 years later in the year of 2007. The first breeder of toygers claims that her main intention of the creation of such mini tigers was to motivate people to contribute to preserving wild cats in the wilderness. This cat breed is also quite expensive, especially compared to other cats: one kitten usually costs between $500 and $3000.

BTW. Did you knew that there lives a population of nocturnal cats in Disneyland?

Which one is the cutest cat breed? Which one you like the most? Of course domestic cats are also as cute as any of these breeds. All cats are awesome!