The legendary amusement park Disneyland was opened in 1955 and is believed to be the most popular park in the world that attracts millions of visitors per year. Since it has earned the reputation of the best place for family holiday, Disneyland today is a dream location for every child and many adults, who want to get to the fairy tale at least one day. However, despite its popularity, there are some strange and surprising facts about the park that we are going to tell you in this article.

Even though the Disneyland is the most popular, and visited amusement park in the world, his first opening day was not as successful as it had been expected to be. First of all, the day was unbearably hot: the temperature was around 38 degrees above zero, which made the visit to Disneyland for visitors quite uncomfortable.

In addition, due to the high amount of sold fake tickets, the park had to host 13,000 more visitors without being properly prepared for such crowd.

As a result, there were not enough food and beverage in the park’s cafes, which left most visitors hungry and thirsty. Finally, many rides in the park did not work, which made visitors even more disappointed and the situation more frustrating. This day of failure was called “Black Sunday” and it is still remembered as the worst day in the Disneyland’s history. Photo credit: By Orange County Archives 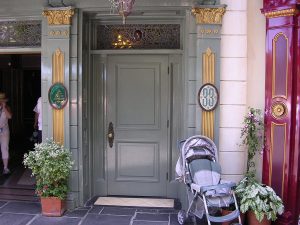 An interesting fact is that it the only one club on the territory of Disneyland, where you can buy alcohol. The initiation free of Club 33 in order to become its member is between 25,000 and 100,000 dollars, while the annual fee is between 12,500 and 30,000 depending on the type of membership. Learn more about this “secret club”.

Walt Disney intended to use this club for personal and business meetings with his business partners, but died suddenly five months before the club was complete. Photo credit: By Mxreb0 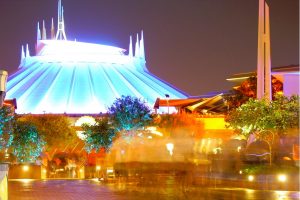 According to the creative idea, the theme park Tomorrowland was the epitome of the future. The visitors can see so many things here, including Space Station 77, Finding Nemo Submarine, and different space battles.

It is also worth mentioning that all plants growing in Tomorrowland are edible. This place is also often called as the location with a unique atmosphere, where future and heroes live. Photo credit: By myjedilightsaber

On the top of the artificial mountain Matterhorn, located at the Disneyland, which is also the highest point of Disneyland, was an empty and unused space that the administration of the amusement park turned into a half basketball ground. Why not? That was a great idea!

The story says that Walt Disney himself gave the permission to create the court and was playing basketball there.

Today Disneyland is not just an amusement park but also a home for more than 100 feral cats living there.

It is believed that the first cats appeared in the park when it had been just opened and settled in Disneyland forever.

In 2001 the administration of the park hired the specialists from the companies Best Friends Catnippers and FixNation in order to catch, sterilize and release them back into Disneyland.

It is not so easy to see these four-legged inhabitants in the park since they are nocturnal creatures.

The secret apartment of Walt Disney

Walt Disney had a small private apartment in Disneyland located on the second floor of the Main Street Firehouse. There he spent time with his family, worked and just enjoyed the silence. The apartment was equipped with a bathroom and a small kitchen. The designer and decorator of this secret housing were Emil Kuri, who is also known as a decorator of many Disney films and the Main Street of Disneyland.

Thousands of people worked in Disneyland, and therefore it is not surprising that among cast members were celebrities as well. For example, the role of Alice in Wonderland in the Electrical Parade in Disneyland was one of the first jobs of Michelle Pfeiffer in the industry of entertainment.

This legendary amusement park was also the place of work for Kevin Costner, who worked there on the Jungle Cruise. There he met his future wife Cindy, who also worked in Disneyland by playing Snow White and signing autographs. Photo credit: By Jeremiah Christopher

Lingerie and Tobacco for sale at Disneyland at early days 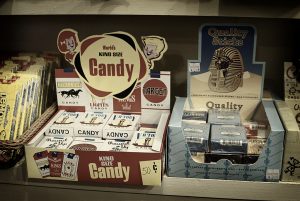 When Disneyland was first opened in 1955, guests of the park could visit a very unusual place called «Hollywood-Maxwell Brassiere Co. Of Los Angeles», the part of which included a historical exhibition of lingerie.

Moreover, it was also possible to purchase there bras and corsets. However, after six months the shop was closed. Many years later in 1990, the similar salon was opened on Pleasure Island with the name “Jessica’s”.

However, it was also closed after a couple of years. Also, on the Main Street of Disneyland, it is possible to see the wooden statue of an Indian that was a marker of the Old Tobacco Shop, where it was possible to buy pipes, cigarettes, and tobacco. Though the shop was closed in 1991, the wooden statue was left in the same place. Photo credit: By Craig Pennington

The Castle of Sleeping Beauty

This castle is known as the main symbol of Disneyland. The prototype of the 23-meters castle is Neuschwanstein Castle located in Germany in Bayern.

Soon after the opening of Disneyland in 1955, the owner of the company Frito-lay received a permission from Walt Disney to open a restaurant in the thematic zone Frontierland.

The restaurant called “Casa de Fritos” became quite popular very soon by attracting guests with its Mexican interior and delicious tortillas. One of the salesmen of the restaurant Alex Foods one day noticed stale tortillas in the garbage and ordered to fry them and sell guests as chips instead of throwing them away. That is how a new dish appeared on the menu and was later called Doritos.

So, have you visited at Disneyland? Did you know these strange facts about it? Or is there some amazing things we should have mentioned here? Please share this and leave your comments below! Find out more amazing stories from the front page.